Human organoids hold tremendous potential for biomedical applications. These three-dimensional structures of cultured cells recapitulate important aspects of in vivo organ development and biological function. They provide tractable in vitro models of human physiology and pathology, thereby enabling interventional studies that are difficult or impossible to conduct in human subjects. 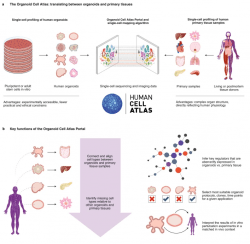 The Organoid Cell Atlas will facilitate the production, quality control, dissemination and utilization of single-cell and spatial genomics data for human organoids, and it will link such datasets to the comprehensive profiles of primary tissues that are being generated within the HCA.

A first step toward establishing the Organoid Cell Atlas has recently been funded by the European Union Horizon 2020 call for “Pilot actions to build the foundations of a human cell atlas” with the ‘HCA|Organoid’ project.

The European Union Horizon 2020 (EU H2020) HCA|Organoid project enables them to establish a first version of the Organoid Cell Atlas over the coming years, which may act as a nucleus for a broader, collaborative, global initiative. In this pilot project, they are generating single-cell transcriptome profiles, epigenome maps and detailed imaging data in a selection of human organoids. For two organs, colon and brain, they will derive and characterize organoids from 100 whole-genome-sequenced individuals each, to capture normal population variation and to establish a reference for disease-centric studies.