The first project, funded by the Open Competition ENW-XS Grant (€ 50.000), is about 3D engineered brain cancer microenvironments for proton radiobiology and will be carried out in collaboration with the Leiden University Medical Center and the Holland Proton Therapy Center:

“Glioblastoma is a devastating cancer of the brain with an extremely poor prognosis. A relatively new cancer treatment is radiotherapy with proton beams, which can be targeted to destroy cancer cells while sparing surrounding healthy tissue. However, despite the treatment’s compelling biological and medical rationale, little is known about the effects of protons on glioblastoma at the cellular level. We will pioneer the most realistic three-dimensional in-vitro model of glioblastoma networks to date by exploiting two-photon polymerization. The model will pave the way for routine, and even per-patient assessment of the efficiency of proton therapy on glioblastoma cells.” The XS category emphatically strives to encourage curiosity-driven and bold research involving a relatively quick analysis of a promising idea. 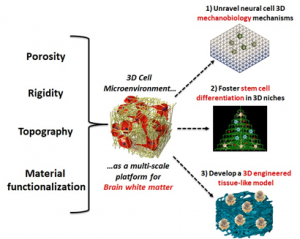 The second project, funded by the Open Competition ENW-M-2 Grant (€ 700.000), will be carried out in collaboration with Vrije Universiteit Amsterdam Associate professor Vivi Heine, appointed at Emma Children’s Hospital, and aims to develop 3D cell-instructive neural microenvironments that can be exploited as standardized and biomimetic in vitro models for the study of white matter abnormalities, such as autism spectrum disorders (ASD). In this project they will investigate how physical and mechanical cues in the 3rd dimension, i.e. mechanobiology, affect neural cell differentiation, neuron-glia interactions and fate in health and disease by using laser-assisted additive manufacturing approaches and induced pluripotent stem cell technologies. The final aim is to show that his integrated approach can be potentially used to ‘diagnose’ patient cell phenotypes and, in future, be employed to screen (lead) compounds for the treatment of disease 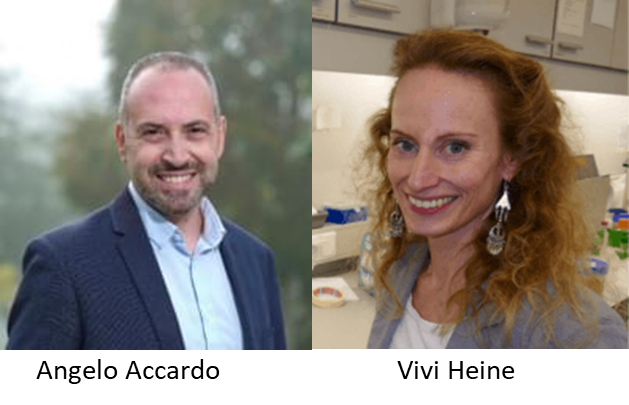