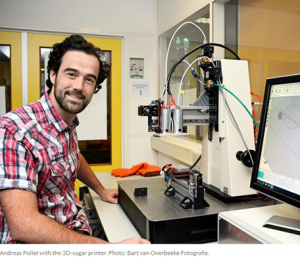 Andreas explains the context and outcome of his research: ‘About one in two men and one in three women will develop cancer in their lifetime. Successfully combatting cancer requires imaging, treatment and monitoring of the tumour. Recently, a promising method has been introduced to visualise the smallest blood vessels in and around tumours. This is done by injecting small air bubbles in the bloodstream that can be seen by ultrasound imaging. The further development of this method is however hampered by the lack of knowledge on how these air bubbles move and behave in the smallest blood vessels, and how this is seen on the ultrasound image. To be able to investigate and better understand this behaviour we have made several practical models of the blood vessel network.

The main model is based on the 3D printing of sugar, for which we 3D print the designed blood vessel network and, after casting with the desired material, let the sugar dissolve. After dissolving the sugar an open network structure of channels with a round cross-section remains. With this method we can print channels with a diameter of tenths of millimetres (thickness of a hair) up to several millimetres, including branching points and curves all in 3D, as also can be found in the human blood vessel network. The created networks can be measured for their flow properties with both ultrasound imaging and microscopy and results can be compared to find any possible causes for the difference between them. This sugar printing model was further elaborated by applying cells of the vessel wall inside the network. With this crucial addition, the channels function similar to real-life blood vessels. 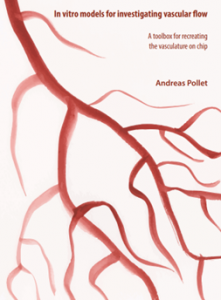 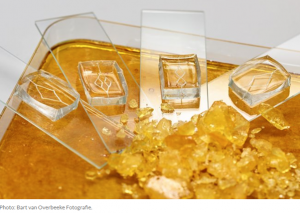 Another model that we developed, and which is used in this research, is based on the stacking of beads. With this we created a column of beads with a diameter of half a millimetre or larger. The properties of the column can be adjusted by using beads of a different diameter. To have a sufficient amount of beads we created a method to make them on a large scale. The open space between the beads can be seen as the blood vessel network. By enlarging or reducing this space we can control the vessel density. This vessel density is an important feature that is being used to discriminate between healthy and tumour tissue. This is also seen in the ultrasound images we made, where our results are comparable to what is seen in patients.

To mimic the blood vessel network in the smallest detail we used cells from the body and put them to work to form networks, creating a third model. In a miniature growth chamber we brought together several cell types in a solution you normally find during wound healing. By mimicking the right circumstances cells form a network in the course of 5 days that remains stable. The formed networks can be perfused and analysed using small particles, similar to the micro air bubbles. With this we were able to investigate how the flow is within natural networks, and how this is influenced by the network properties.

Each of the developed models contribute to a specific area of the research and increase our knowledge on how particles move through and distribute in complex networks, similar to the networks found in blood vessels. With this model we can mimic healthy blood vessels but also those in and around tumours, which have a higher blood vessel density and more chaotic network structure’.

For more information via the following link.