An Organ-on-Chip is a single- or multi-channel device, containing living (engineered) organs or tissues, that are cultured under controlled conditions in a smart, dynamic environment. They recapitulate the architecture and function of these tissues in organs of the intact human body. Their flexibility allows the chips to mimic vasculature and blood or lymphatic flow, muscle contraction and breathing motion. Tissues can be derived from healthy individuals or patients, thus enabling studies of organ function and mechanisms underlying (genetic) disease, facilitating discovery of new therapeutics and monitoring toxic effects of drugs real-time. By combining multiple organs in a chip, the physiology of combined parts of the human body might be reproduced. Organ-on-Chip technology is widely regarded as a potential game-changer for many applications and might offer a potential alternative for traditional cell and animal models. 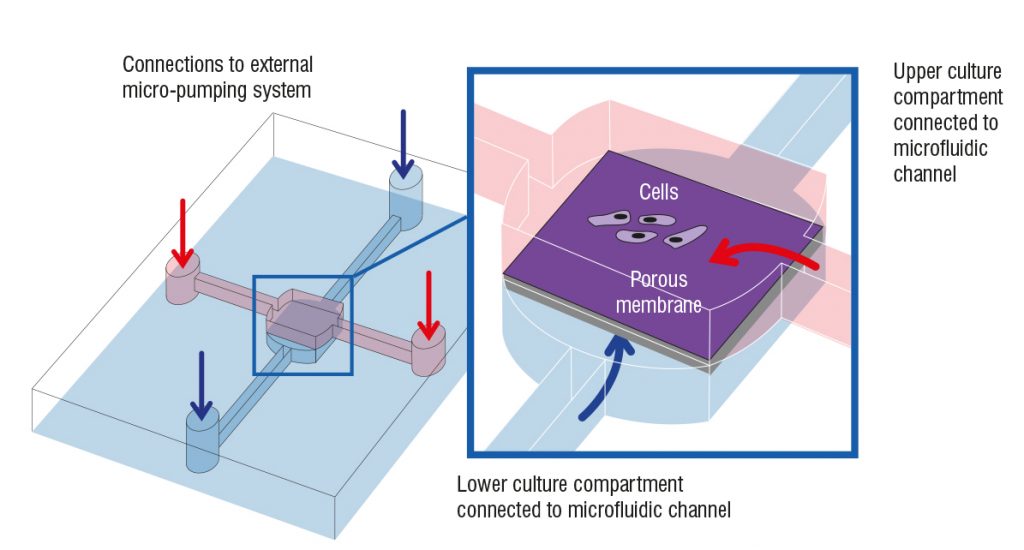 Why are Organs-on-Chips needed?

An important reason for developing Organs-on-Chips is the need for better test systems to study human health and disease. Each day, millions of people worldwide use drugs that will not cure them or even help their symptoms. Unintended side-effects of drugs are among the most common causes of death. In many cases, the toxic effects are on the heart, liver or kidney. But for many diseases there are actually no drugs at all. This is in part due to poor knowledge of disease mechanisms in humans and in part because the drug development process is inefficient. Due to the lack of good human model systems nine out of ten drug candidates fail at late stages of development, with huge implications for the ultimate costs of each drug obtaining market approval. Also in other sectors than healthcare, predictions of the health risks of environmental factors, food and cosmetics based on conventional cell culture and animal models are also not necessarily reliable. Organ-on-Chip technology might contribute to solving these problems. They thus represent promise for future developments in healthcare.

What are the applications of Organs-on-Chips?

Organs-on-Chips can contribute to many biomedical applications, including:

There is increasing evidence that animal models are not necessarily ideal in predicting how certain diseases will manifest in humans or how humans will respond to certain treatments. In addition, the use of laboratory animals is increasingly debated for ethical reasons and is thus controversial. The advantage of human Organs-on-Chips is, that they may have a better or at least equivalent predictive value for humans and contribute to reduction in use of laboratory animals.