On December 8th 2021 Thijs Pasman successfully defended his thesis ‘Poly(trimethylene carbonate)-based membranes for biomimetic lung epithelial-endothelial models’ at the University of Twente. The research was performed in the research group of Biomaterials, Science and Technology at the University of Twente under the supervision of Prof Grijpma, Prof Stamatialis and Dr Poot. 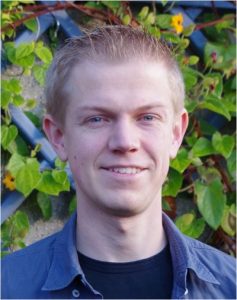 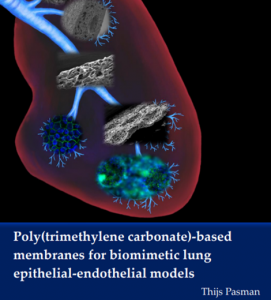 Lung diseases are one of the most common causes of death. Moreover, there is a rise of lung-associated viruses such as SARS-CoV-2, which has caused the Covid-19 pandemic. Because of this, there is an unprecedented relevance of and need for lung models that generate reliable data of potential drugs and treatments for lung diseases. As a result, lungs-on-chips (LOCs) have been developed. LOCs are small devices that attempt to mimic lung function more closely than traditional models by implementing more physiological features, e.g. microfluidics and mechanical stimulation of cells to mimic breathing. Most LOCs comprise two compartments, i.e. a ‘lung compartment’ and ‘blood vessel compartment’, separated by a porous membrane. Usually, lung epithelial cells and endothelial cells are cultured on opposite sides of those membranes in the lung and blood vessel compartments, respectively.

Phase separation techniques generally involve providing a certain stimulus or environment to a cast polymer solution, which then separates into multiple phases, usually a polymer and a non-solvent phase. In all cases, extraction of the non-solvent after phase separation leaves a porous polymer membrane with pores where pockets of non-solvent resided before extraction.

Photo-crosslinking is a method to improve the structural integrity of the membranes, preventing the collapse of pores over time, thus better preserving the morphology of the membranes. Different parameters were changed to influence membrane properties. For TIPS, focus was laid on lowering the temperature during crosslinking, which influenced homogeneity of membranes, pore properties and water permeance. With LIPS, the effects of pore formers and crosslinking on membrane properties were studied. The pore former significantly influenced pore properties, water permeance and other membrane properties. Different approaches were used to combine LIPS with photo-crosslinking, which has not been done before. Porous, form-stable, and permeable membranes with both TIPS and LIPS were developed. However, both methods need further optimization to fully utilize their potential.

Using EIPS, the effects of the molecular weight of PTMC, the non-solvent type and concentration, and the temperature and humidity during EIPS were investigated. These parameters were optimized to develop membranes with relevant properties for cell culture. Then the non-solvent concentration was changed to tailor the membrane porosity and permeability.

The different membranes were characterized, including their morphology, gel content and water permeance. Since the EIPS-based membranes showed the most potential, a lung epithelial-endothelial model of Calu-3 lung epithelial cells and human lung microvascular endothelial cells (LMVECs) on the EIPS-based membranes was developed. The model was characterized through Zona Occludens-1 (ZO-1)/CD31 and live/dead staining, as well as electrical resistance and FITC-dextran permeability assays. In addition, stainings for epithelial- and endothelial-to-mesenchymal transitions (EMT and EndoMT, respectively) were also performed. The Calu-3 cells and LMVECs were ZO-1- and CD31-positive, respectively, and the model showed good viability and a barrier function. Moreover, overall, co-cultures performed better than monocultures.

In addition, EIPS was combined with micromoulding to produce membranes with alveoli-like microwells. A similar lung epithelial-endothelial model of Calu-3 cells and LMVECs on these microstructured EIPS-based membranes was developed. This model was characterized using similar stainings and assays as used for the model on flat membranes. The cells displayed similar results in terms of the stainings as those on flat membranes, and the model showed a barrier function. Lastly, the co-culture model on the microstructured membranes was integrated into a commercial organ-on-chip platform, and ZO-1/CD31 and live/dead stainings were performed on this model.

The presented novel fabrication methods and PTMC membranes enable further investigation into the effects of membrane properties such as microstructures and cyclic stretch of the membranes on cells. Moreover, it could lead to the use and development of more biomimetic membranes for LOCs and in vitro lung models in general, stimulating the advancement of these models.