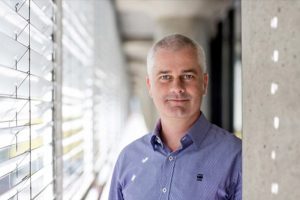 In 1995, he joined Philips Research Laboratories in Eindhoven, where he worked on a wide variety of applications. In 2008, he became chief technologist, leading the R&D programs on (micro-)fluidics and materials science and engineering. Next to his main job at Philips, he was a part-time professor of Microfluidics Technology at Eindhoven University of Technology between 2004 and 2013.

Jaap den Toonder has (co-)authored over 130 scientific papers, as well as over 45 patents, and he has given more than 50 invited lectures at international conferences. Jaap den Toonder has founded and directs the Microfab/lab: a state‐of‐the‐art facility at TU/e that encompasses a unique set of many techniques needed to create and analyse microfluidic devices and microsystems including biological materials. He teaches courses on microfabrication methods, microfluidics, and heat and flow in microsystems, in which hands-on learning is a key element. Jaap den Toonder is recipient of an ERC Advanced Grant in 2019.